The Mammoth Book of Combat: Reports from the Frontline 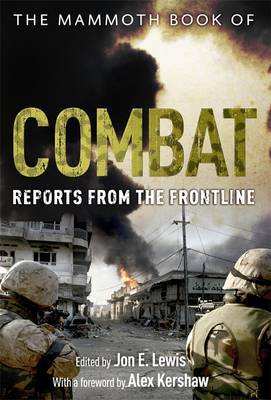 The Mammoth Book of Combat: Reports from the Frontline

Over a hundred eyewitness accounts of the reality of combat from some of the finest writers of the last century and our own. Lucid, vivid, complex images of conflict, from Walt Whitman on the American Civil War to contemporary reporting from Afghanistan. The collection includes Martha Gellhorn on the Battle of the Bulge, Michael Herr at Khe Sanh, David Rohde's and Anthony Shadid's Pulitzer-winning accounts of Bosnia and Iraq respectively, Christina Lamb's famous account of being under fire from the Taliban, Robert Fisk on being attacked in Afghanistan, and Nicholas Tomalin's 'The General Goes Zapping Charlie Kong' (one of the inspirations for Apocalypse Now) among many other pieces of exceptional war reporting.

Lucid, vivid, compelling eyewitness accounts of conflict from the American Civil War to the conflict in Afghanistan.

Jon E. Lewis is an historian and writer, whose books on history and military history are sold worldwide. He is also the editor of many The Mammoth Book of anthologies, including the bestselling Cover-Ups.