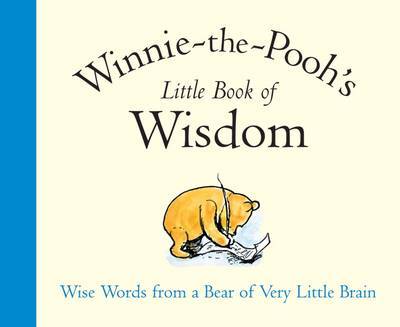 Whether you're gloomy like Eeyore, wise like Pooh or full of BOUNCE like Tigger, each of these little books offer a unique take on life straight from the mouths of A A Milne's lovable characters. Winnie-the-Pooh's Little Book of Wisdom While you wonder what to do, sit down and sing a song. A honeypot full of Wise Words and Useful Advice from that Bear of Very Little Brain. Eeyore's Little Book of Gloom Even when you think you have nothing worth stealing ...someone will come along and take your tail. A leaden collection of Pessimistic Ponderings from the Hundred Acre Wood's resident cynic. Tigger's Little Book of Bounce "Can Tiggers swim?" "Of course they can. Tiggers can do everything." A little book bursting with Bouncy Bon Mots about Things Tiggers Like. It's The guide to Get-Up-and-Go!

A. A. Milne grew up in a school but never intended to be a children's writer. He fought in the First World War, wrote some eighteen plays and three novels, and fathered a son, Christopher Robin Milne, in 1920. Christopher led Milne to produce a book of children's poetry, When We Were Very Young, in 1924, and in 1926 the seminal Winnie-the-Pooh. More poems followed in Now We Are Six (1927) and Pooh returned in The House at Pooh Corner (1928). E. H. Shepard famously illustrated both Winnie-the-Pooh and The Wind in the Willows though, like A. A. Milne, much of his career was devoted to work for the satirical magazine Punch. Shepard trained at the Royal Academy before going to fight in the First World War and winning the Military Cross. To illustrate Winnie-the-Pooh, Shepard observed the real Christopher Robin Milne, but not the real Pooh. The bear in the pictures is in fact based on Growler