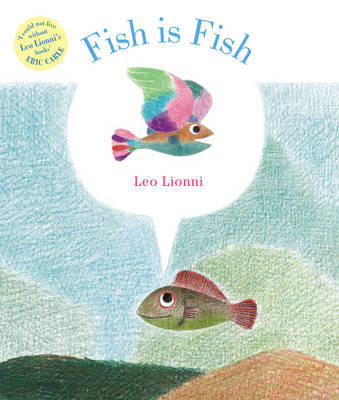 The pond is home to a tadpole and a minnow, two underwater friends. But when the tadpole grows into a frog and hops onto the land, a new world unfolds before his eyes. When he returns to the pond, he tells his friend fantastic tales of the things he's seen: birds and cows and mysterious things called people! Fish longs to be a frog so that he can see this wonderful world too, and decides that he will follow in his friend's footsteps, come what may...

A stunningly illustrated tale from master picture book creator Leo Lionni, teaching the importance of accepting who you really are.

"With his accustomed subtle interplay of graphic wit, clear language and plain thinking, Lionni wisely proves that a minnow's grasp should not exceed his oxygen supply - that there's lots to be said for the life of even a small fish in a small pond." New York Times "Picture books I could not live without." Eric Carle "A superior book, simple, but eye-catching." School Library Journal

Leo Lionni, an internationally known designer, illustrator, and graphic artist was born in Holland and lived in Italy until he moved to the United States in 1939. His picture books are distinguished by their enduring themes, graphic simplicity and brilliant use of collage. He died in 1999 at the age of 89.